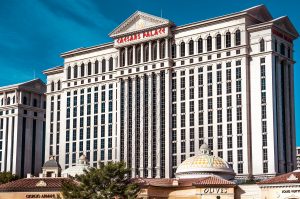 2021 was the best year, revenue-wise, the US gaming industry has ever had and annual reports from outfits such as Caesars Entertainment are baring that fact out. The American gaming giant reported revenue of $97 billion for 2021 with every division in the company clocking at least twice as much revenue as they did in 2020. As a whole, Caesars’ annual revenue was up 168.7 percent over 2020.

Much of Caesars’ big revenue numbers, $69 billion, came from the sale of divested properties, mainly the William Hill retail branches it sold off after acquiring the UK gaming operator. Without that boost, the company still managed to squeeze out a very impressive $9.7 billion in revenue, a leap of 61 percent over 2020. The company used $1 billion of that property cash to whittle down its debt by $1 billion.

Caesars may see more cash from real estate in 2022 with the potential sale of its Planet Hollywood property on the Las Vegas Strip.

A solid chunk of Caesars’ non-property-sale-related revenue came from its flagship operation in Las Vegas where it raked in $3.04 billion for the year. That’s up $2.65 billion over the anemic numbers produced in 2020.

Caesars expects to see at least one line item reduce significantly in 2022 and that’s the amount of cash it’s spending on Caesars Sportsbook promotions. Company officials are now focusing on customer retention, especially those players that are active Caesars Rewards members and building a 21 percent market share. Caesars CEO Tom Reeg, praised Caesars Sportsbook in comments reported on by 8 News Now Las Vegas, saying , ““We couldn’t be happier with where we are in digital.”

Though Caesars is unlikely to have numbers quite this impressive this year, the company is well-positioned to see impressive numbers throughout 2022.