Online gambling is big in Spain, and always has been. But now, the market is set to explode, thanks to a new series of regulations being planned by the Spanish government.

Though it’s a monkeywrench in some political philosophies, it seems to be a fact of online gambling: Regulations help business. That’s proven to be the case in the EU, as new regulations in places like the UK, France, and Italy have pushed their markets to new heights. There’s no reason not to expect the same in Spain.

Throughout Spain, gambling is a national pastime, and the country spends twice as much on gambling as does the UK — no small feat.

In 2009, the Spanish government launched a plan to regulate internet gambling in Spain, as well. Though that process is slow-going (as it has been in all other nations to attempt the same), now, in 2011, the process is moving more quickly, and licenses are starting to become available.

“In the coming months, the Spanish market will be the next and arguably the last major European market to go though the gambling regulation process,” writes Cmedia’s Oliver Crane at EGR.

“Now that the US has sealed its doors closed, that France and Italy’s governments have enforced tough legislations on operators and that the UK market that has never been more mature, it seem as if Spain is the last attractive (and growing) market.”

Marketing to the Spanish gambler
“But the Spanish online gambling industry isn’t your average market,” Crane adds. “Spanish people don’t trust foreign companies, and players will only convert if the brand and operators’ customer service teams have a local feel.”

That’s an important element to consider when setting up an online gambling plan for Spain: You not only have to speak the language, you have to get the cultural tones right, as well. It helps to be a resident or to have spent significant amounts of time in Spain itself. Latin American-style Spanish isn’t gonna cut it.

“Operators who look to penetrate the market by simply translating their software without rebranding or hiring local customer support will fail,” Crane warns.

Spanish SEO
Crane also warns that “SEO entry barriers are extremely high”.  Search engine rankings in Spain are controlled by the few large media companies, he explains. That’s more in tune with how the EU treats Google and searches, as opposed to the U.S., where searching is still a relatively level playing field.

And that’s a challenge. It means that you’ll have to market your affiliate partners via other online gambling keywords in Spain, as opposed to the brands themselves.

And if Google’s Keyword tool is to be believed, online gambling keywords in Spain aren’t exactly on fire. 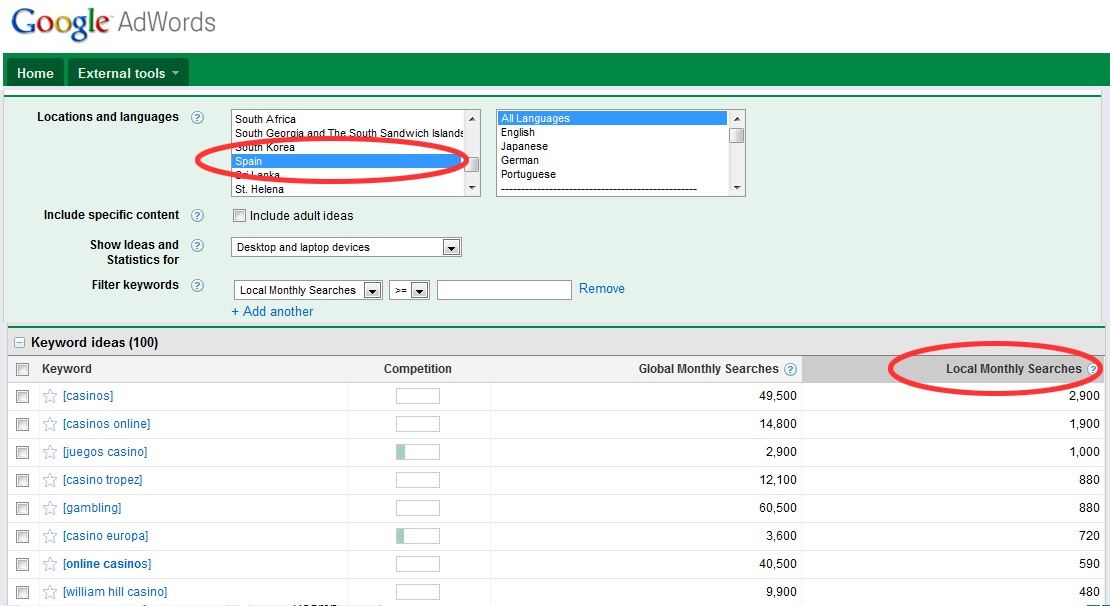 Winning sources: Who’s got the licenses?
As any quick browse of the casino affiliate programs in the CAP Listed Programs roster will show, most gaming brands already have a presence in Spain.

But, as with markets like the U.S., Australia, and Germany, that aren’t yet regulated, most of these operators aren’t specifically licensed by Spanish authorities.

That doesn’t mean that affiliates should neglect Spanish brands. But it does mean that, if you’re truly serious about online gambling in Spain — and, based on the advice above, you really should be — then you’ll want to look at partners with Spanish licenses.

Since that licensing process is currently underway, it’s a bit early to create that list. But with major brands like 888 and Ladbrokes looking to get Spanish licenses, it won’t be long before it happens.

Until then, affiliates can keep on top of international iGaming licenses with iGaming Business’s newly launched iGaming License tool, letting you know who’s got online gambling licenses in what country.