Can U.S. lawmakers possibly bring themselves to address the issue of online gambling in the face of so many other pressing issues? That’s the big question. And, if the past few years have been any indication, the answer is clearly no.
Barney Frank tried to pass U.S. online gambling laws in 2009 and 2010, unsuccessfully. Senate Majority Leader Harry Reid also made a failed last-minute attempt to do the same last year. This year, Texas Rep. Joe Barton is jumping on the poker regulatory bandwagon, and he seems to have the crucial support of Senators Reid and (gasp) Jon Kyl, two politicians who have traditionally resisted online gambling in all forms.
So, 2011 seems a bit more promising than past years, if still far from a sure thing.

And for that reason, some states are racing to see if they can implement online gambling before the federal government, to ensure they’re getting a piece of the action (estimated to be in the millions in tax revenue, if not billions).
On Monday, we highlighted the efforts of New Jersey to get back in the race after a heartbreaking last-minute veto to proposed online gambling legislation earlier this year. Now, we look at two other Eastern states hoping to do the same.
Massachusetts
Boston-area lawmakers are planning on launching online gambling in the Bay State. Not particularly because they love the idea of online gambling, but because they don’t want the feds to do it first.
“Whether I think it’s a good idea or not, it’s clear Washington is moving toward online gambling,” said State Treasurer Steven Grossman, per the Boston Herald.
Grossman added that the progress of other states to regulate online gambling first is “clearly a threat to the Massachusetts Lottery and the urgently needed local aid that it helps finance.”
Now, a State Senator, Michael Rush, has filed “legislation that would allow the Massachusetts State Lottery Commission to create a online gambling pilot program that proponents say could net $1 billion a year for the Commonwealth,” reports Patch.com.
“This is more than just allowing the purchase of lottery tickets online – this is a new, interactive way of playing the lottery through new online games of chance,” said Rush’s chief of staff John Regan. 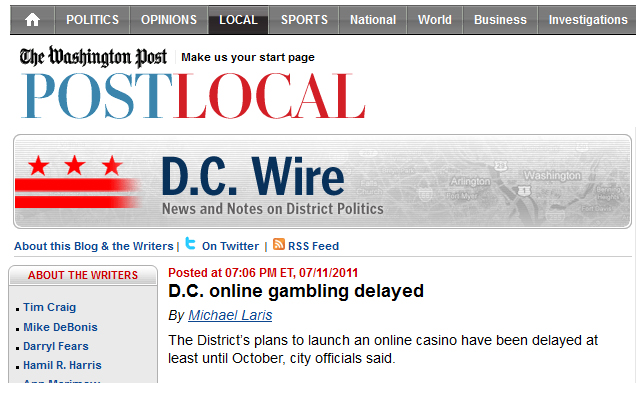 D.C.
Meanwhile, plans to launch online gambling in the District of Columbia have been pushed back to at least October, amid controversy that the laws were pushed through too quickly and “didn’t go through a public process,” says one councilman.
“It could be October, it could be November, it could be next year,” said DC council member Jack Evans per the Washington Post.
DC’s plans include implementation of online racetrack betting and an online lottery system that included casino and poker games such as Texas Hold’em, blackjack, and bingo. The district’s lottery officials plan to step up lobbying this summer to convince voters to support the plan.