888 isn’t the world’s largest gaming brand, or the best known. But in recent months, the Gibraltar-licensed company has enjoyed a series of big market gains, giving it newfound power and position in the global online gambling market.

Poker power
The most obvious gain: 888Poker is one of the European-facing poker rooms that’s benefiting the most from Full Tilt Poker’s sudden absence from the market, as we recently reported. PokerScout now lists 888 as the fifth most trafficked poker room in the world.

So strong was 888’s first half that it reports its full-year forecasted results will be “marginally ahead of the current market view,” reports Reuters.

The company attributes this success to strong showings in its poker and casino verticals. 888’s “B2C poker revenues reached US$13m, a 58% increase compared to the same period last year ($8m) due to the success of its new Poker 6 platform,” reports EGR, “while casino revenues also performed strongly up 34% to $36m compared to $27m in Q2 2010.”

The Poker 6 platform launched in June 2010 and has proven popular.  The company’s interim leader, Brian Mattingley, said that Poker 6 has “outperformed the industry, while we have also benefited from the Full Tilt [shutdown] and doubled our customer recruitment, now enjoying sixth position in the global liquidity rankings.”

“While the excellent figures reported today give the board confidence of future growth, the second half will be impacted by our need to invest in regulating markets,” Mattingley added. 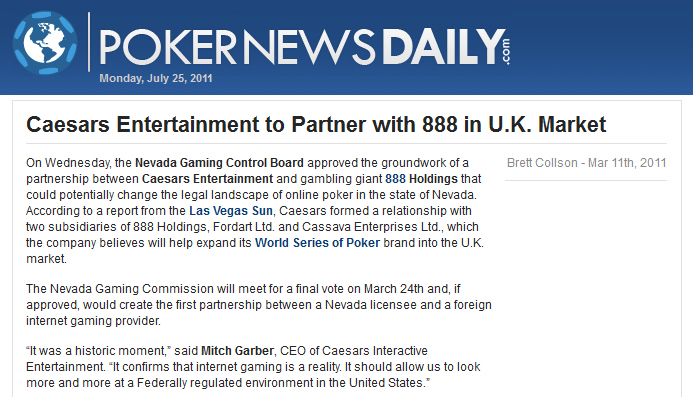 Italy, Spain, and the U.S.A.
He’s not kidding. 888 is indeed moving aggressively into regulating markets.

Both divisions of the company — 888’s business-to-consumer gaming sites, as well as Dragonfish’s business-to-business development branch — are set to expand into Italy. The company initiated its Italian market reach just days ago, on July 18. 888 is also expanding aggressively into Spain.

But much more interesting is recent speculation that 888 is looking to branch into the United States. The company is talking with Ceasars Entertainment about potential partnerships, and those talks are reported (by Bloomberg) to be in “advanced stages”.

888 already partners with Ceasars Entertainment to provide that U.S.-based casino company — the world’s largest — with online gaming software for the UK.

888 Affiliates is a CAP Listed Program.