It’s that time of year again — as summer winds down, football season is winding up. (Yes, we’re talking U.S. football here. Apologies to all other nations!)

And what better time to be a betting affiliate than football season? What other sport drives this kind of traffic and interest?

Oddsmakers are already gearing up for the 2011 NFL season — and they have been since the last Super Bowl ended.

The NFL is the most popular pro sports league in the U.S., and the immensity of the NFL betting industry proves that. Some reports put the global online betting activity for U.S. football is as high as $500 billion.

Unfortunately, this year’s season is still hanging under a serious question mark. But is that such a problem? Or is it possible that more search activity is being generated because of this year’s NFL lockout?

“Given all of the uncertainty, the media coverage, and the general hunger for football action, there is going to be a whole lot of speculation and countless wild theories out there,” writes T.O. Whenham at Doc’s Sports. 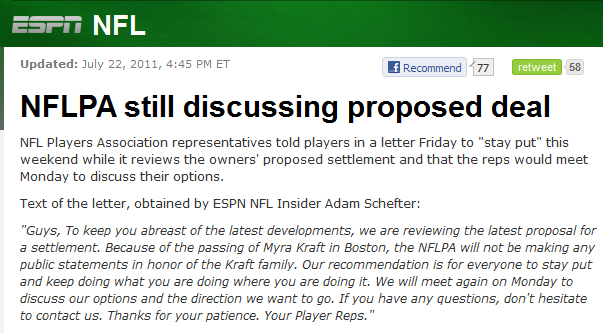 At any rate, the lockout looks to be nearly over, and most experts believe the normal season will begin as scheduled. You can bet that football fans are already looking for websites to place their bets. (The Packers and Patriots top the oddsmakers’ lists, by the way — no surprises there.)

Major online betting sites like Bodog and BetUS are starting to post their odds for the 2011 college football season, including a lot of interesting prop bets.

As this happens, and as the season draws nearer, expect a surge of online activity as football fans search for those odds.

“The top-25 preseason polls are expected to be released in the coming weeks,” reports SportsbookGurus.com, “with the odds on favorite Oklahoma Sooners expected to the be the No.1 team to begin the year, with challenges from perhaps Alabama to grab some of the first place votes in both the Associated Press and Coaches Poll.”

Conference USA, the NCAA division that’s made up of Southern U.S. states, is expected to be the focus of a some fevered betting for the upcoming season, as well.

“Oddsmakers will be forced to throw up big totals in C-USA play again this season,” notes Covers.com. “Eight of the 12 teams return starting quarterbacks, with the majority coming off prolific seasons. Conference USA teams combined to throw 302 touchdown passes last season. No other conference threw more than the Big 12’s 269.”

All this anticipation over NFL and NCAA football odds will generate more searches from bettors to get in on the action.

That, in turn, is a great opportunity for betting affiliates to grab some extra traffic by gearing a site page or blog content towards the betting odds, then optimizing that content so searchers will find it.

And it all starts in the next few days. Don’t miss your chance to join the 2011 U.S. football betting party. Check out CAP’s list of partner sportsbook affiliate programs here.