Things couldn’t get much worse for Full Tilt Poker, the site that was shut down a week ago when its home-based license was revoked.

Soon after that happened, the company’s French license at FullTiltPoker.fr was suspended by ARJEL, the French regulatory body. The reason for the suspension (don’t laugh) was “an interruption in the ability of players to access the site.”

The company seems to be lost at sea. The Digital Journal criticizes Full Tilt for sending out “no e-mails to its massive user base nor even to have issued so much as a press release.” But the same article adds, of the outstanding debt of $150 million to players, “whose fault is that? Clearly not the company’s.”

(Meanwhile, Chuck Blount thinks that if the money “were there, payment would be a non-issue.”)

New owners, new lawsuit
Meanwhile, as we reported last week, within two days of the site’s shutdown, a group of EU investors emerged to try to buy the site. The most recent word is that talks between Full Tilt, the Alderney Gambling Control Commission (AGCC), and that potential third party is still in “early stage” talks.

If the deal goes through, the group says repayment of owed funds would be a priority. Though that’s not really for them to decide. Any new owners will also have to deal with the newly launched class action suit, filed in District Court in New York, that seeks the immediate return of the $150 million still owed to players. 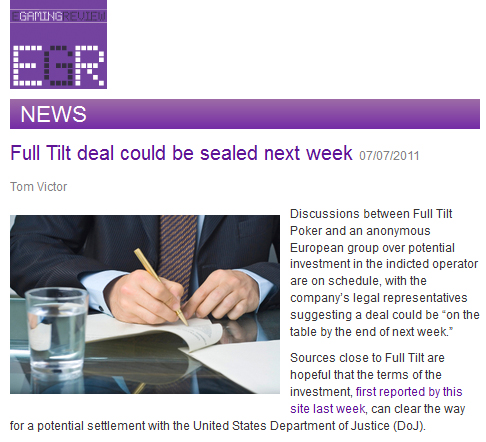 The “complaint” demands a jury trial, claims that Phil Ivey owns at least 5 percent of the company, and accuses Full Tilt of “racketeering”, among other crimes.

Job losses
If the new owners don’t save the sinking ship, as many as 700 employees may be losing their jobs — which would be a huge blow to the already-struggling economy of Ireland.

Rivals profit
According to EGR, PokerStars raked in 66% of Full Tilt’s players in the first 36 hour since the site shut down. “PokerStars’ average player numbers increased by 2,607, some five times the increase in player traffic recorded by the next largest PartyGaming of 503.”

Likewise, bwin.party shares surged — but have since resumed their normal topsy-turvy course. “We estimate that Full Tilt has a 10-15 per cent share of the non-US poker market,” noted UBS analyst Simon Whittington. “With a similar share themselves, we believe Bwin.party should be a prime beneficiary of any market ‘vacuum’ created.”

Players mourn
For some, the loss of Full Tilt is more annoying than disastrous. Roar.com’s Matt Bungard sums those feelings up nicely:

“So, yesterday evening when I sat down and played PokerStars for the first time in three years, and dealt with an unfriendly and cluttered interface, a less responsive table setup and an overall product that just felt sloppy and half-baked, all I and thousands of others, can do, is hope that when an appeal on behalf of FTP to regain its gaming license takes place on July 26, that all parties involved can reach an amicable solution.”