It’s invite-only at this point, which is definitely part of the appeal. But it’s more than that, of course. As ComputerWorld notes, Google+ has a lot in common with Facebook’s look and feel, but offers some unique (and sensible) improvements to Facebook’s seven-year-old model.

And so far, it’s made a more than respectable splash. Citing a study by BrightEdge, eWeek reports that “the Web’s 10,000 largest sites shows a 33 percent spike in placement of the new Google +1 button” since its introduction.

That’s still falling far behind Facebook, which enjoys a two-to-one advantage in plug-in integration on these large sites.

“Despite the surge in the last few days, Google +1 is only offered by 4.4 percent of these large sites, up from 3.6 percent in June,” compared to Facebook’s 20 percent, the report continues.

Still, the +1 button’s only been around a few weeks. Considering that, these numbers are impressive — especially considering the much less enthusiastic reception of Google Buzz two years ago.

What Google+ does
Some of the features goal of Google’s new tool are definitely promising. For starters, it enables sub-group communication in a way that Facebook lacks. 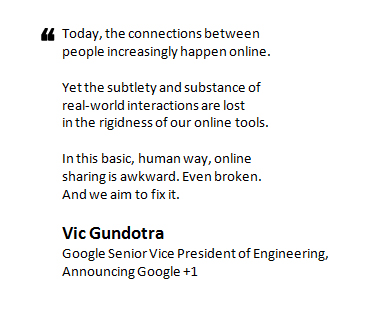 With Google+, you can aim specific updates at specific groups, be they your fellow casino affiliates, your high school friends, your immediate family, or whomever. That’s a big selling point for those who are growing to resent Facebook’s relative lack of boundaries.

According to Ezra Gottheil, an analyst at Technology Business Research, the idea “makes a lot of sense.

“It’s smart, and while you can do something similar in Facebook, it’s not Facebook’s main thing. It’s not as easy to do.”

That’s not the only upgrade, of course. Google+ also smoothly integrates Google’s search and news power with scrolling updates on your plus page. You also have the change to easily recommend, or “+1”, anything you find in a Google search directly to members of your network.

Effects on SEO
Given the sudden popularity of this new marketing tool, and realizing that it’s likely to grow, what does Google +1 mean for SEO?

The biggest effect so far is that the Google+ network has replaced Twitter’s former presence in Google search results. (Google’s contract with Twitter expired last month.) Will SEO marketers see this as a reason to lean away from Twitter in favor of Google’s new system? It’s too early to tell, but it’s not at all unlikely, particularly as the service moves beyond its invite-only phase and into a more universal market.

“The SEO community is abuzz trying to decipher how, exactly, one would increase their chances of getting their content into Sparks,” reports PC World. “Some have speculated that the process is akin to getting on top of Google News pages. Barry Schwartz of seroundtable.com posted a reply from a Google exec saying that Sparks is ‘still very much in flux and being further expanded and tuned.’”

And that’s the problem with predicting the SEO power of Google’s newest offering. Not all of the planned phases have been rolled out. Many services that have yet to be launched, like sponsored Google+ pages with their own URLs, will likely affect SEO more than any of the features already introduced.

Plus or minus?
Are you a +1 fan? Have you joined the network? Do you have a +1 button on your site yet, and if so, has it had an effect on your SEO?