After the sudden loss of Full Tilt Poker’s gambling license two weeks ago, as well as its entire U.S. market two months before that, the poker room is also facing a mass exodus of what remains of its European players.

As a result, EU-facing poker rooms have amped up their competition to score the biggest share of the former giant’s thousands of cash players.

Last week, PartyPoker made the unprecedented move of ending all multi-table tournament fees for the entire summer. The now-third-place iPoker Network acted next, as Titan Poker announced that it’s removing (or sharply reducing) rake from its cash game tables.

“Rake Break” isn’t going to apply to all tables, and it isn’t going to last forever. Titan Poker also “reserves the right to amend or cancel this promotion at any given time.”

All the same, it’s a great time to be promoting some poker rooms in the EU — these are some incredible player incentives that could help boost your conversions. And U.S. poker affiliates looking to expand in Europe couldn’t ask for better player promos to get started with. 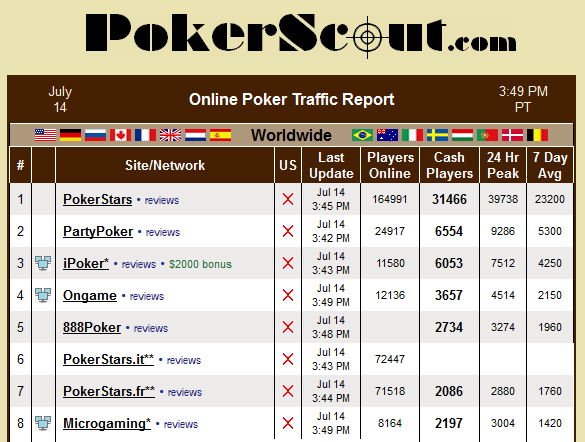 That same report reveals good news, too: Over the past week, total online poker traffic was up 3.4%.

PokerStars is still leading the online poker pack and has gained 17% since Full Tilt’s absence. PartyPoker (up 35%) now holds the second global position, with the iPoker network (up 24%), Ongame, and 888Poker (up 20%) rounding out the top five.

“The International Poker Network is up by 14% and Cake Poker has seen a 40% increase in traffic. But probably the most impressive stat is Everest Poker’s 46% leap.”

Full Tilt’s future
Full Tilt’s license was suspended by the AGCC on June 29, and French regulators soon did the same. Now, the company is facing lawsuits from the estimated $150 million it still owes to players, but may also be on the verge of salvation with a potential sale looming.

According to Subject: Poker, on June 30 the company entered into an exclusive bargaining agreement that requires Full Tilt to “stop negotiations with other prospective investors for at least three weeks while the primary suitor conducts due diligence investigations and negotiates with the poker site’s executives.”

Meanwhile, the site’s current licensure will likely be decided at the AGCC’s public hearing, scheduled for less than two weeks from today, on Monday, July 26 in London.

“AGCC’s choice to hold a public hearing in to the future of Full Tilt Poker demonstrates our willingness to act transparently and we will welcome members of the public and the media,” said André Wilsenach, the AGCC’s executive director.

“As ever at all times, our primary concern is the protection of the player.”