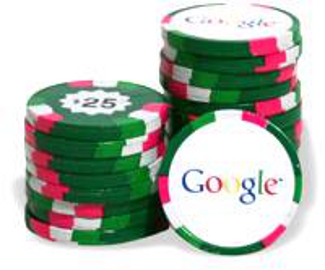 Bwin and Google, and software developers Hettema & Bergsten are joining together on a new webcam enabled, online poker venture called Aces Hangout. The new site is aimed at casual players and is a clear shot over the bow of social gaming companies like Zynga, whose Texas Hold ‘Em is one of the most popular games apps on Facebook.
New Markets for All Involved
Bwin Party may seem like an odd partner for Google, whose policies towards the online gambling industry have been anything but friendly. But the partnership offers serious advantages to all involved.
In the past couple years, Google has had limited success trying to grab a piece of the exploding social media market that’s dominated by Facebook. Their answer to Facebook is a feature called Google+ Hangouts, that allows users to share games and other apps with select friends and contacts.
But while Facebook seems to have the market for trading high school photos wrapped up, social gaming is market that’s still very much up for grabs. That probably explains Google’s willingness to climb into bed with a gaming company.
For Bwin, a partnership with Google and social gaming could offer a profitable alternative to traditional gambling models. Poker apps for Facebook and smart phones are extremely profitable, popular and have the advantage of being legal worldwide. And, of course, being the first gaming brand to work with Google has plenty of advantages, too.

Web Enabled Poker
Unlike Zynga’s Texas Hold ‘Em, Aces Hangout utilizes webcams instead of avatars to enhance the social aspect of the game. It’s definitely a leap forward for players who want face to face contact with their opponents, but plenty of Internet gamers crave anonymity. The project is still in Beta development, so there’s no word on how the site would handle some of the, uh, misbehavior that’s plagued video chat sites like Chat Roulette.
If you’re interested in testing out a non-cam-enabled version of Aces Hangout, sign up is free. As of this writing, no official launch date for the project has been announced.
Do you think that Google’s partnership with Bwin is going to work out? Let us know in our Online Gambling Newswire forum.