Say what you will about the online poker crackdown in the U.S., and the problems that’s creating worldwide. But the global online poker industry is still doing well enough to celebrate some pretty big milestones.

One of the main targeted “Black Friday” sites, PokerStars, by far the world’s largest online poker site in terms of traffic, tops the list. On its “Road to 100 Billion” (yes, that’s 100 billion hands of online poker), the site is close to dealing its 65 billionth hand.

And the room is giving the industry plenty of incentives to pay attention, awarding generous prizes to players involved in every millionth hand until the magic number of 65,000,000,000 is hit. (At the time of publication, PokerStars was at 64,775,524,962 hands. But, of course, that number’s changing fast.)

Microgaming’s billions
Some other poker sites and networks are recording impressive numbers, too. 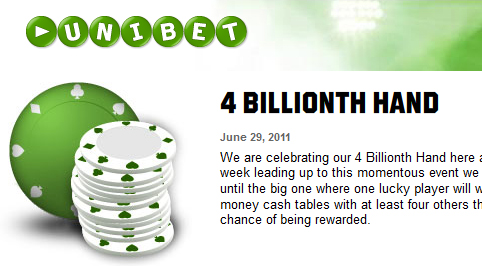 The Microgaming online poker network may have only a fraction of the players and traffic that PokerStars does. But the rooms on that network are still thriving, recently celebrating their four-billionth hand of poker. That may be a far cry from the 65 billion PokerStars is about to hit — but it ain’t bad, either.

And most Microgaming-network poker sites have been busy promoting the event. 32Red, Ladbrokes, and Unibet have all been giving away lots of prize money to players trying to be the one to get dealt that four-billionth hand.

The affiliate angle
Why should affiliates care about these kinds of online poker milestones? There are a variety of reasons:

1. All the poker rooms listed here are promoting these milestones with extra prizes for players. PokerStars.com is celebrating its 65 billion hand build-up by giving away extra player prizes that come close to $1,000,000, and 32Red celebrated its four billionth hand by giving away €20,000 to six lucky players.

2. These billion-hand milestones are being heavily promoted on social media, giving them extra marketing power.

3. The fact that a poker room has dealt so many hands is a strong indicator of its trustworthiness. Even after PokerStars’ Black Friday problems, for example, its 65 billion hand promotion shows that it’s still going strong, and that players who can legally still play there have every reason to keep doing so.