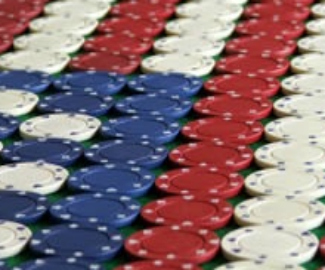 As the US House of Representatives debates bills that propose the legalization and regulation of online poker, the rest of the world seems to be feeling positive about the outcome as giants in the online poker and casino industry like MGM and Bwin.Party have been preparing to re-enter the US market for a while now.
US players also seem prepared to welcome newcomers with open arms, as the online poker withdrawal symptoms are starting to show in hundreds of bored males being forced to do the dishes thanks to the massive amount of free they now have.
During the summer, news broke that MGM and Boyd were gearing up for the legalization of online poker in the United States. Then, in August, news broke that online poker site Bwin.Party reported a drop of 21% in profits for the past year.
As a solution for both parties, the companies decided to engage in a joint online gaming venture in the US that will become official on December 31st, 2011.
The agreement is a merger deal between MGM Resorts International, Boyd Gaming Corporation and BwinParty Digital Entertainment Plc. The companies will offer online poker services to US players if the market is to become regulated. The new company will be named Federal NewCo., and the shares will be distributed between the merging partners in the following way: 65% belongs to Bwin.Party, 25% belongs to MGM and 10% belongs to Boyd; leaving Bwin.Party in charge of the decision making.
Excitement from All Parties
Expectations on this merger are very high, both from US players and from the companies involved. “We are particularly excited to be working with MGM and Boyd. Combining their significant assets and regulatory expertise with the strength of our PartyPoker and World Poker Tour brands, all supported by our in-house technology, makes us perfectly positioned for any future opening of the US online poker market,” said Jim Ryan and Norbert Teufelberger, the co-CEOs of Bwin.Party.
This statement was followed by an announcement from Jim Murren, Chairman and CEP of MGM Resorts Internationals, in which he said: “MGM has long been supportive of federal legislation to strengthen UIGEA and provide the needed regulations and consumer protections for online poker.”
Federal NewCo. has plenty of tools to expand its business across the United States, given that the merging companies are extremely experienced in online gaming and have acquired respect within the industry as separate entities. The participating parties are aware that they might require different measures depending on whether online poker is legalized at a national level, or on a state-by-state level.
Are you a US player? Tell us what you think of online poker legislation and share your opinion with fellow US players and people from around the world at our forums!