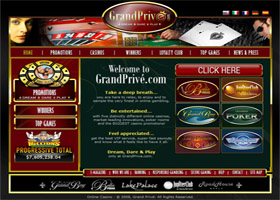 In case you missed it, check out the list of the 10 Worst Gambling Affiliate Programs to help our readers avoid some of the less-reliable partners. As a follow-up to that piece, check out why Grand Prive is one of the worst rogue affiliate programs out there.
When it comes to rogue affiliates, few can rival Grand Prive for sheer audacity. This company has been in business for a very long time, by Internet standards, and has been generating complaints on forum boards the entire time. But nothing compares to the furor they raised when shutting down their affiliate program back in 2008.
What Does Lifetime Revenue Mean?
Between 2005 and 2008, many affiliates reported problems both with receiving payments and player tracking, with Grand Prive sites. Grand Prive blamed on the Micrograming software platform they used to run their sites, but that may not have been entirely accurate. Microgaming officials have long denied that Grand Prive’s problems were related to their product and point out many casinos that have used the software without problem.
But who caused the problem in the first place became a moot point when affiliates realized most of the Grand Prive casinos were not only still open and taking new customers, they were also still working with customers sent by their former affiliate sites.
This act was especially egregious considering that Grand Prive had promised web masters lifetime revenue from customers they sent to Grand Prive properties; though that was clearly not the case. Terms and conditions violations like this are one of the quickest routes to the rogue designation Grand Prive earned from nearly every online casino watchdog group.
Over time, the company made a few attempts to pay back some of the money owed to affiliates, but the efforts never really amounted to much. Overall, few in the affiliate world seemed impressed by Grand Prive’s efforts.
Back for More
Given Grand Prive’s less than stellar reputation, many in the affiliate did a spit take in early 2011 when the company announced that their affiliate program was back in business. The new program was built on a new platform and promised webmasters revenue from their old customers going back to April of 2010.
In their announcement, company officials claimed that their initial response to the problems in 2008 was hampered by factors that were out of their control. (Though they don’t elaborate on what those factors may have been.) They also promised that things would be different this time.
But like many an unfaithful husband has learned, the adage, “Fool me once, shame on you. Fool me twice, shame on me,” is more than just a saying. Not surprisingly, affiliates were reluctant to give the company a second chance. Grand Prive’s return to the market was particularly unappealing to the many webmasters who still felt the company owed them money.
Learn a Lesson
The Grand Prive story is a great example of what can happen to gaming companies that burn the very people who send them business in the first place. When trouble first bubbled up with Grand Prive, online forums lit up and word spread very quickly. The same dynamic came into play when watchdog groups like CAP branded the company as a rogue. And now those same folks are warning other affiliates against doing business with Grand Prive properties.
Trust is a huge factor in any business, but it’s especially important in web-based businesses where partners may be working on opposite sides of the globe. And, as Grand Prive is finding out, the Internet has a very long memory, especially when money is involved.
Do you think that Grand Prive deserves another chance? Let us know in our Casino Affiliate Scams & Warnings Forum.