The domain names of three of the largest online poker rooms that accept U.S. players have been seized by the FBI and shut down in the U.S., several sources are reporting.

As of this morning, Friday, April 15, PokerStars.com, FullTiltPoker.com, UB.com and Absolute Poker (both part of the CEREUS network) are now off-limits to visitors from the United States.

The Department of Justice, working through the FBI, was behind the seizure. Those U.S. visitors attempting to reach these sites now, instead, are treated to a message from the FBI explaining the situation:

“This domain name has been seized by the F.B.I. pursuant to an Arrest Warrant in Rem

“Conducting, financing, managing, supervising, directing, or owning all or part of an illegal gambling business is a federal crime.

“For persons engaged in the business of betting or wagering, it is also a federal crime to knowingly accept, in connection with the participation of another person in unlawful Internet gambling, credit, electronic fund transfers, or checks.

“Properties, including domain names, used in violation of the provisions … or involved in money laundering transactions are subject to forfeiture to the United States.” 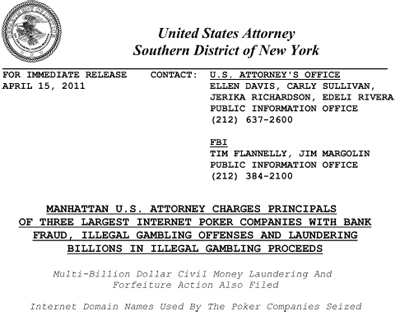 U.S. authorities have also released a news announcement regarding the seizures, stating that eleven defendants were charged, “including the founders of the three largest Internet poker companies doing business in the United States – PokerStars, Full Tilt Poker, and Absolute Poker” with “bank fraud, money laundering, and illegal gambling offenses.”

The U.S. is also filing a civil money laundering and in rem forfeiture complaint against the companies, “their assets, and the assets of several payment processors” they use.

“In addition, restraining orders were issued against more than 75 bank accounts … and their payment processors, and five Internet domain names,” the news release continues.


Reaction
The online gambling industry has been caught off guard by the FBI’s move. So far, the authorities are working their way through domain name servers, so not all regions of the U.S. are affected — but that should quickly change.

Some Canadians and UK residents are reporting seeing the confiscation warnings as well, while many in the U.S. are still able to access the sites. But it’s to be expected that the seizures are just beginning, and, over the course of the next week, the U.S. government’s full plan will come into view.

It’s speculated that the poker companies in question could transfer their games over to a new domain for U.S. players, since the games haven’t been shut down, only the domains. But it remains to be seen how effective a strategy that is, and just how militant the U.S. authorities will be in this new action. (So far, they seem to be taking it pretty seriously.)

Stay tuned
The timing of the message is certainly interesting, given how close some U.S. states are to regulating online gambling, and the fact that D.C. has confirmed plans to do so.

Stay tuned to the Casino Affiliate Programs Blog for updates on the situation.