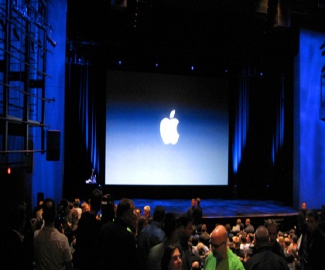 Apple just finished what was probably the biggest and most chaotic year in the company’s history. In the span of 12 months, Apple both became the most important company in the world and lost its founder to cancer. Apple may be starting off the new year with a very special announcement, although details are not known at this point.

Rumors are flying that Apple is planning a special event in New York City sometime in January. People are baffled as to what Apple could possibly be calling the event for or if the event is even going to happen at all.

Everyone is baffled, while wondering what all the secrecy is about. Apparently it has nothing to do with any of the products Apple plans to launch in the coming months, such as the iPad 3 or the television set that Apple is rumored to be launching.

Word on the street is that the event is media-related. The basis for that claim is that Eddy Cue, the Special Vice President of Internet Software and Internet Services is rumored to be involved. Cue is responsible for a number of media properties Apple owns, but the App Store is probably the most prominent.

While the real reason for the event is still unknown, journalists have proposed a few theories as to what all the buzz could be about. According to Devindra Hardawar of the Washington Post, it could be about iAd, the mobile advertising service that never took off. Hardawar speculates that Apple may be trying to put a more positive spin on the iAd platform. Mobile marketing is becoming increasingly important as we head into 2012, so Hardawar may be right.

Other journalists have proposed that the event may regard the appointment of a new head of the advertising office in New York. That position has been vacant since Andy Miller left last summer.

Whatever the reason for the event (or if the event is happening at all), everyone is eager to find out. New developments should come to light over the next couple of weeks.

What do you think Apple might want to disclose in this event? Share your thoughts in the forums.