Poker’s biggest event kicked off yesterday in Las Vegas as the 2011 World Series of Poker (WSOP) dealt its first hand.

This year’s edition of the globe-trotting poker tournament is the 42nd annual, and, as usual, the games are being played in Las Vegas at the Rio Hotel and Casino.

From here, the tournament moves into its end game on July 7 when the final, $10,000 no-limit hold’em main event begins. On July 19 the November Nine are decided, and those nine players are scheduled to come together for a final table starting on November. Get the full schedule here.

Black Friday concerns
Of course, this year’s WSOP may be more anticipated than ever before, if only because the industry is eager to see if the recent online poker crackdowns in the U.S. will affect the tournament’s success.

“It’s sad to say, with all the great players who will attend, that much of the early attention will be on those who might not show,” writes Gary Wise at ESPN. “Black Friday put a lot of pressure on a few names in the poker industry, and there are real questions about whether they’ll want to face the music.”

And that concern comes after last year’s WSOP was the second-biggest of all time, drawing “72,966 players from 117 countries playing for $187 million in prize money,” as the Las Vegas Review-Journal points out.

“The consensus is that the smaller events will be mostly unaffected, but the big buy-in tournaments may see their numbers hurt by the aftereffects of Black Friday,” Wise continues. “The main event will be the real test. Although many of the initial estimates suggested the numbers would be as low as 2,500-3,000, many of those same prognosticators suggest the numbers will be closer to 5,000. 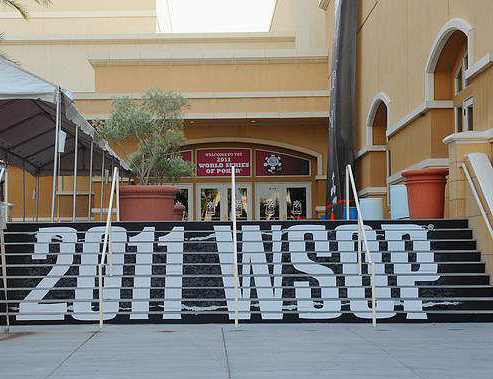 Wise believes that attendance will still be strong. “In 2009, when the recession hit full-bore, many predicted similar number drops, but they never came. My personal guess is that the final number is somewhere around 6,000-6,500, and I wouldn’t be the least bit surprised if it ended up being higher than that.”

The affiliate angle
The World Series of Poker is an excellent opportunity for poker affiliates of all stripes to drive additional traffic. Studies have shown that the WSOP is indeed the biggest traffic driver for the online gaming industry.

True, most of that traffic comes before the even begins, as players scramble to win buy-in cash to enter the WSOP themselves.

But, with the extensive coverage enjoyed by the WSOP from the media at large — including increased ESPN coverage this year — the tournament should be a great marketing tool to deliver traffic during game play, as well.

For some preview photos of the event, check out LasVegasVegas.com. CardPlayer.com has more coverage, here.