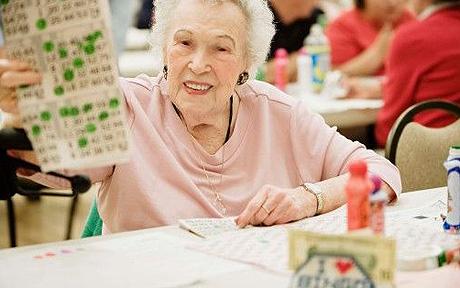 Granny is no longer your typical bingo player anymore.

Online bingo is a game that suffers from something of an image problem. That’s because most people still associate the game with smoke filled bingo halls packed with senior citizens who yell at you if you’re sitting in their lucky seats. But online bingo players are different animal entirely and web masters and affiliates that understand the demographics of this market segment can take advantage of their revenue building potential.

Finding hard and fast statistics on line bingo players is not a simple matter. There’s no definitive source on the subject, and gaming sites tend to keep their research to themselves. But when you string together all the available information, a clear picture begins to emerge.

One fact about bingo players that every source seems to agree on is that they are predominantly female.  Most reports estimate that women comprise between 50%-70% of all online bingo players. And some sources also report that female bingo players are more likely to engage in marathon gaming sessions than male players.

It’s believed that many women are put off by the boy’s club atmosphere found on most poker sites and have gravitated towards friendly bingo sites as a substitute. Most bingo games are aware of this dynamic and feature friendly bingo callers to make player feel welcome.

For affiliates, this information means that there are two serious opportunities to build revenue from online bingo players. Of course the bulk of a marketing campaign should be aimed at women. That said, you can rest assured that almost no one is aiming their advertising efforts at that under served male segment of male bingo players.

The United Kingdom has, by far, the most high profile online bingo community on the planet, but it’s not necessarily the biggest bingo audience. Though UK bingo players may number as many as 3 million people, according to some reports, but that’s just a fraction of the total market. The bulk of bingo money comes from the United States and Japan.

British bingo players are, indeed, enthusiastic, and the UK bingo market is indeed growing. Most sources agree that smoking bans in bingo halls and rapidly improving Internet connections are behind the burst in UK bingo. But many British players congregate in smaller stake rooms where bets can be as small as 10 pence.

Not Just for Grandma

Brick and mortar bingo halls are, generally, considered the domain of white haired old ladies taking a day off from the senior center. Whether that stereotype is necessarily true in real life is debatable, but that’s definitely not the case with online bingo.

The average age of an online bingo player hovers at around 47, but that’s not where the real action is taking place. Women between the ages of 18-25 make up around a third of the UK market and that number is growing all the time.

Online bingo is an underserved segment of the gaming market that’s likely to see major growth over the next few years. Given the low stigma associated with bingo and the recent relaxation of online gambling enforcement from the US Department of Justice, we could very easily see a bingo explosion in the next few years. New affiliate programs, like Wintingo, are also being introduced.

Are you working with bingo affiliates? What kinds of player trends are you seeing? Let us know in our General Discussion Forum.